Just a few more days to go in the June streak. I have to say, I'm pretty pleased with how it's gone so far. I have a few more days, and it looks like I'll be on track for about 130 miles for the month by the time it's all said and done. That's the highest total so far this year, including marathon build-up. I feel good, and my legs are stronger than they've been in a while. I feel really ready to start my NYC marathon training plan in eight days (EIGHT DAYS! EEEP!). 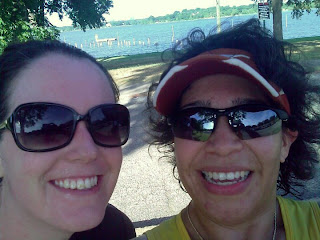 The best part about the June streak, though, is that I've had the great opportunity to run with so many different people this month. We ended May running with a great group of Red Light Runners out at the Stonebridge Memorial Day race, and since then, I've had the great opportunity to meet up with some of them for Wednesday runs and long runs as well.  I also have had the chance to run with old friends from my marathon training group in 2009 and new friends like Kris, who I met today for our long run out at White Rock Lake. Without a doubt, sharing my love and my passion for running is one of my favorite parts of my running lifestyle. 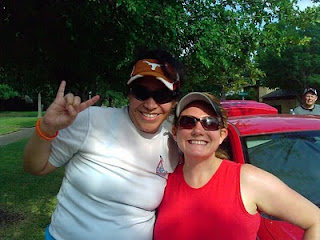 And as much as I am such a social creature (otherwise known as "Chatty Cathy" by my Cowtown peeps because I never. stopped. talking. on our training runs!), I really enjoy the camaraderie and friendships that I have developed in conjunction with my running. I am looking forward to getting to know my RLR friends better, meeting even more of my virtual friends from Twitter & FaceBook at upcoming races and events, and sharing the energy and enthusiasm of all of them.  It really energizes me and keeps me motivated.  I will definitely need that as NYC and marathon #9 approaches.
at 7:48 PM No comments:

So today is the longest day of the year, a perfect day for a late evening run, which it will have to be since I slacked this morning in a big, bad way. I did a great job last week of getting my running done in the morning, which was mostly a necessity because of the hideous heat and humidity that has struck our area already.  Honestly, I know that I live in Texas, and I know that i't's hot as hell here, but usually, this kind of heat is reserved for late July and August, not early June. It makes me afraid for the rest of the summer.  Seriously. Oy.  That said, I re-discovered the joy of running in the early morning last week, and feeling like I had started out with a good strong accomplishment that could carry me through the rest of the day.

I am feeling pretty strong in my running the last few weeks, despite the fact that I am probably going slower than I have in the past overall. But that's a function of being less concerned with the speed with which I do the miles and more with just getting them done. I also have been doing a lot of "naked runs" in which I leave behind not only the Garmin and/or stopwatch, but also the iPod on occasion. I am really focusing on making each run as strong as possible and meeting the intent of each run - some days I just need to Run It Out and use it as a stress reliever, sometimes I want to do a little bit of speed play and do some intervals, and some days (my favorites lately) have been more social runs, where I meet up with my RLR friends and chat while we pound out the miles. Without a doubt, I am finding that having someone or multiple someones around to talk to makes those miles fly by, regardless of the pace, and I finish those runs feeling stronger physically and mentally recharged.  I'm sure it has something to do with working from home 100 percent, and having limited interaction with other humans (besides my kids - which don't get me wrong, I love that, but you know what I'm saying) during the workday. In any case, I am at a really happy place with my running right now.

I've got exactly two weeks until the official start of my New York City marathon training plan, and 10 days until the end of the Run Every Day in June streak is complete. I'm looking forward to both of those events, and I'm confident that the streak has met it's intention of getting me ready, physically and mentally,  for the rigors of marathon training in a hot Texas summer.  So, another few weeks to go, before we BRING IT!!
at 9:12 PM No comments:

Well, one streak is still going...

um, yeah, I meant to do a better job of keeping up with this blog... apparently, that was a huge fail on my part.  But, I am glad to report that the June running streak is going strong at 12 days. I've clocked 25 miles already this week, with tomorrow's 7.5 miles (with hill repeats) still to come.  If I can continue this, I'll definitely have the right kind of base built up for the start of my official training cycle for New York City.  Of course, I have yet to lose any weight, even with the added mileage, but I've kind of come to grips with that. I'm not happy about it, but I'm also not going to fret over it. Instead I'm focusing on getting my miles in, getting stronger, and making sure that I hit all my training runs. I'll let the rest take care of itself.
at 6:49 PM 1 comment:

So the June streak is going strong... so far... I'm two for two.  Woot!  Yeah, I know. But I totally could have bailed today when our running group social run got cancelled for lightning.  Instead I took a nap to allow my dinner to digest, then hit the park with Elder Child.  He was on his outdoor wheels and got a little practice on his outdoor form while I did a couple of loops and tried to beat the storms myself.  I didn't take my GPS, watch, iPod or even look at my phone, so I have no idea how long it took me to run the 2.5 miles I covered.  All I know is that I got it done.  Not as much as I would have done with the group, but better than nothing. And it kept the streak alive.  At two.  Yay me....

OK, so the month of June is a base-re-building month for me so that I can start to prepare for NYC, after mostly taking off May to recoup physically and mentally from Oklahoma City. There's been a lot going on in my brain this month, too, and it's been hard to capsulize it in any kind of blogging entries in a way that I feel comfortable with. There's only so much that I really want to share with the blogosphere, especially since between Twitter, Daily Mile and Facebook, so much of my interweb life and my real life are becoming intertwined and overlapped. So that is something I have to be very aware of as I verbally vent on this site and elsewhere. But, I also do love having my thoughts and ideas documented here on Suburbia South, as it has always been really helpful to come back to later and help me remember all the things that I thought were important to me at the time. So I do want to blog more. Not sure that I'll necessarily make it a daily occurrence (like the run streak I'm about to start for June..yeah, I'm doing it again. I'm an idiot, I know. I do this to myself about twice a year. This time, it's going to to be great, though! I promise!!) but I know I want to track more of my thoughts here, so maybe I'll have more deep pensive posts here. Probably not, but a girl can dream, right?

What I really wanted to do to kick off this month, though, is to recap the first five months of the year, with some hard numbers and a few stream-of-consciousness thoughts.  So, here we go:


All those numbers and such are fun to analyze, but I have to say that the most rewarding part of the first five months of 2010 for me running-wise has been the creation and growth of our Red Light Runner group. What started as me pacing one friend to his first 5K in January has grown to a regular Wednesday night social run (soon to be expanded to Sunday mornings, too), to more than 20 people finishing different 5K and 10K runs/walks around DFW. We've got a Facebook group, a team logo and will soon have shirts made (technical shirts, of course!!). We've been able to expand our group every month and get lots of our friends and families excited about running, walking and living a healthy lifestyle. So even if I haven't hit 500 miles for the year yet, I still have a lot to happy about so far in 2010!
at 12:14 PM No comments: