So I was really excited to run this year's Fort Worth Turkey Trot, because the little one had said he wanted to run it with me.  He said he was all set for the 5K, so my plan was to run the 5K at his pace, doing 3-2 running/walking breaks, then queue up to run the 10K, giving me 'round about 9 miles for the day.  That would have been a perfect weekday run for the training plan I'm using... Oh, yeah, that.  The training plan I'm supposed to be following - the one that I've essentially neglected because work hours are crazy and because of this wicked cough that will. not. go. away.  As late as Tuesday I really thought this was still a workable plan. But then, neither the Elder Child nor the husband wanted to get up early to hang with him while I ran, and I'm not comfortable having him unsupervised in a crowd of 20,000 runners and spectators while I run for an hour.  So I was still trying to figure out how to make this work.  Then last night, the boy decided that he'd rather spend the night with Grandpa and sleep in than wake up at o-dark-thirty and run in the cold, so I had my answer.  I'd skip the 5K and just do the 10K on my own.

I knew it was going to be a tough run, because I've only made 3 workouts in the last two weeks.  Those have been good, but the volume is just not enough, especially not since I'm supposed to be ramping up to a half in three weeks.  Um, yeah... Anyway, I decided that I would just go out and have fun, and not worry about my time.  I wouldn't set my watch, I wouldn't even look at it.  I'd just run.

I didn't leave the house until past 7:15, since I've always left so early and then I sit around in the cold and do nothing.  This time, I figured I'd get as much sleep as possible, knowing the race didn't start until 9:00.  I stopped for batteries for the compact camera, and got to the race area about 7:45.  I parked in a different spot than usual because traffic was crazy-go-nuts, so I found a lot in a neighborhood off to the side and walked about half a mile to the start.

I have to say, I love this race, and I love that so many people come out to run/walk this thing, but the registration for this is always a disaster.  They just aren't organized well.  I'm sure it's hard to get so many volunteers and such lined up for the late registration, and I'm sure it would help if more people signed up ahead of time (yeah, OK, that would be ME, but whatever!), but race-day sign-ups always make my head hurt and make the process analyst in me cringe.  In any case, I got signed up, wandered over to see the first 5K runners come in, and then walked over to the start.  I grabbed some curb and chilled in the sunshine until it was time to start.

The start was delayed a few minutes because the 5K walkers were still on the course, so we didn't start until about five minutes after 9:00.  The course was also changed somewhat from years past, since there is construction in the area and we had to work around it.  It ended up that we did a lot of switchbacks through the neighborhood, and for most of the race I had no idea which direction I was headed or exactly where I was.  No matter, though, right?  Just keep moving.  I will admit I looked at my watch when we passed the 5K mark, and it read 9:35, so I was about on pace for a 30-minute or so 5K split. I was happy with that considering the hills in the first half of the course, and the fact that the first mile seemed really, really, really long.  After that, I started really questioning why I did this, and I could feel myself slowing down a bit.  Mostly because there were crazy hills on the new route - not steep ones, just a lot of gradual risers that would have been OK if not for my cough and the whole having trouble breathing thing.  I will say, though, that even if I was slow, I did not walk, not even on the hills.  And then suddenly, I started feeling good again, and I was enjoying myself, and having fun again.  Cool.

I finished in about 1:06, which is definitely slower than last year, but a better time if I had sat it out altogether. I really was focused on getting out there and having a good time, and I think I did that.  I caught up with some buddies from the Cowtown training group, so that was good, and then I came home and got ready for Thanksgiving dinner with the fam.  All in all, it was an enjoyable morning, and as usual, I was thankful for being healthy enough, cough or not, to be out there running around.  The only glitch to the day is that I wandered around the neighborhood for about 10 minutes after the race because I forgot where I parked.  Yeah, I'm a smart cookie, I tell ya!! 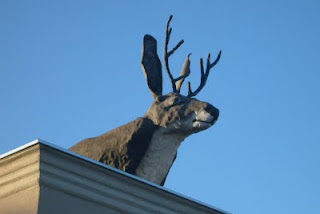 the Jackalope is REAL thing, people! 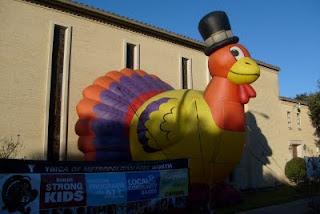 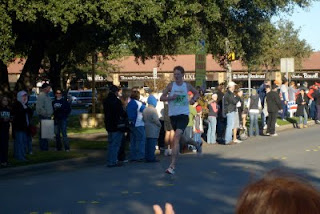 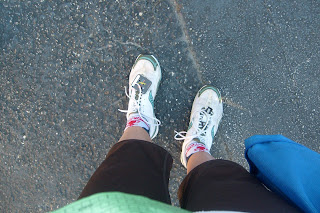 My own two feet, before the start of the 10K. 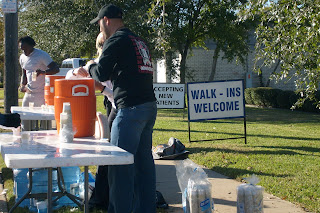 Maybe it was oxygen deprivation from the hills, but I found this sign behind the water stop hilarious! 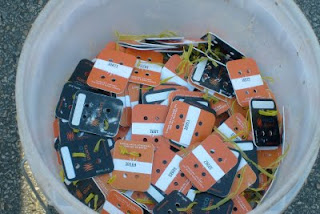 bucket o'chips at the finish 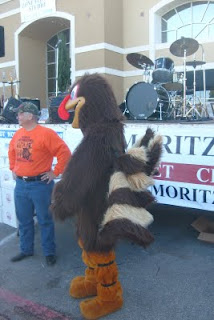 work is crazy. I've got a cold. I haven't run since Saturday. Bleargh.

kinda glad I haven't actually paid for White Rock yet, 'cause I'm not sure I'm ready for a half. Haven't done more than 8 miles yet and it's less than a month away. Sigh.

I haven't given up on it, I'm just not sure how I'm going to pull it out and not have a miserable day. Argh.

Good news? I bought a scale with my birthday gift card (whee! HB to me...) and it shows I'm down three pounds from the end of the summer when I had my girl-parts adjusted. Hey, I take the good news wherever I can get it.
at 6:58 PM No comments:

it would probably be better for me

if I could put down the candy corn. I guess it was a bad idea to put the jar in my office, in easy reach whenever the learning curve for the new job stresses me out. It's much faster to satisfy the sugar craving with a small handful of these than to go into the boy's room and dig through the Halloween bag (don't even pretend I'm the only one who does that... I'm not the only who does that, right??). It's a bad habit, and I need to do a better job of resisting the temptation.

I am doing better at getting the regular runs in, although I was hoping to start a streak for November. Late evening at the computer on Monday and then an unplanned trip to College Night last night conspired to keep me from running those nights, but I have been able to maintain a better semblance of a routine, which is a good thing. I'm still miserably slow, but I'm OK with that for now. Considering the year that I've had, I'm ok with just getting the mileage in. I'm like those baseball players that are interviewed on TV, "I'm just happy to be here, I want to stay within myself and do the best I can for the team." Yep, that's me, just happy to be here.

Speaking of baseball, Go Yankees! I opted out of baseball a few years ago (still don't like A-Fraud/A-Roid, whatever) but found myself watching the World Series this year and rooting for the Bronx Bombers and slipping back into the sport just like that. And it has nothing, absolutely nothing, to do with Johnny Damon. Nothing. Really. ;)