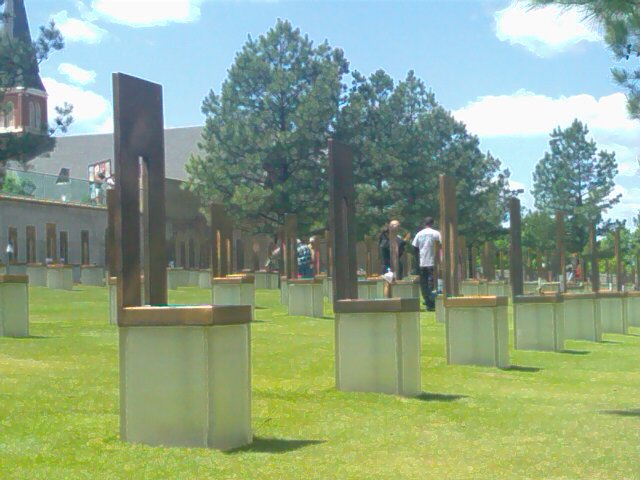 
Such vivid memories of that day.  I was 8 and a half months pregnant. Another woman in my office was expecting as well, and our coworkers hosted a joint baby shower for us that day.  We were busy at work all morning, and then drove over at lunch for the party. For some reason, I didn’t listen to the radio on the way, but some people did, and that’s how we found out. Word spread like wildfire throughout the guests at the shower. Surrounded by the hope and excitement of new life, but faced with the devastation and grief of loss only three hours north on I-35.

News was sketchy at first, but it was very quickly evident that it was no ordinary act of terrorism.  The daycare in the Murrah Building made this attack even more horrifying. The victims were true innocents. It was inconceivable that someone could do this. 168 people, children and adults, were killed that day, hundreds more injured.

My manager begged me not to watch the news coverage, for fear that it would be too much for me to handle, that it might send me into early labor. And so I avoided it, something that I am sure I would not be able to do today, in this age of twitter and instant news accessible on the radio, on TV, and delivered to the palms of our hands. I heard the stories, but I didn’t see the video until years later, when on the 10th anniversary of the bombing I finally brought myself to watch. The passing of the years did not make the footage any easier to bear.

I first saw the memorial, with the 168 chairs in a field of grass, next to the reflecting pool, across from the Survivor Tree, when I ran the marathon for the first time in 2010. So many chairs. So many little chairs. That day was a test of will and determination for me, as I was injured before I even started the race, having fallen over a fence trying to get into the corrals. But what kept me going that day was thinking of those chairs. And the lives that they  represent.

This has been a horrible week in so many ways. Senseless attacks at the finish line at the most revered marathon in the country, a tragic explosion in small-town Texas, events that alone would shatter our peace and our sense of security. But coming within days of each other, days apart from the anniversary of the Oklahoma City killings, I think instead, these attacks and tragedies ultimately end up bringing us closer, strengthening our resolve, uniting us across Texas and across the country. It’s how we work.

18 years ago, after we left that baby shower, emotionally drained from confronting the fear and devastation wrought from the act of terrorism, my coworker went home, then went to the hospital and gave birth to her daughter.  One month later, my son was born.

Out of darkness comes light and hope.

A Letter to My Hockey Player

I really can't believe your high school hockey career is over at last. It seems like for as long as we can remember, so much of our lives have revolved around hockey, and it doesn't seem real that all that can be coming to an end.

Because hockey moms have to be just a little tougher than their players. I know you don't think that's possible, that I could be tougher than you. You're the one doing the endless drills and getting pounded against the boards and missing the shots on goal by just the tiniest amount. How can I be tougher? Because I'm the one who's had to watch you be so tough for so long. I'm the one who's watched you skate until you could barely hold your head up straight, gassed and exhausted, and yet always ready to hit the ice for another shift. I'm the one who's had to sit in the stands and wince every time there's a collision on the ice, or a fight for the puck, or a dirty player who decides that he's going to charge you, or trip you, or take a stick to your head.

I don't think you will ever know how hard it is to watch that, but I have done it because I know that you come alive in a way like no other when you lace up those skates and put that smelly gear on and pull that jersey with your name on the back over your head.  Probably the most painful thing I have ever had to do is to think about whether we should let you continue to play after the second concussion. Thinking that we would have to say goodbye to that part of your life prematurely ripped my heart apart, and I’m so glad that you were able to come back and play stronger and better than ever before.

We have had so many wonderful experiences through hockey, and met some wonderful people who I know will remain friends for years to come. We’ve been able to travel to watch you play, and we have seen you grow and mature and develop both as a player and as a person. We’ve had some great seasons and great coaches and hockey families, and some years that we would just as soon forget. But the thing is that all of those experiences, the good and the bad, have together forged you into the person that you are today. So you have to take them all, and I do that gladly.  I hope you do, as well.

Mostly, when I think about you and your hockey career, I think about the determination and grit and desire you showed when you wanted to play selects. When you were not selected that first year, you embarked on a mission. You did everything you could to learn, practice, and become the best player you could be, a player worthy of wearing the DSS sweater. You took on extra ice time, you worked relentlessly, and you turned yourself into the player you wanted to be. That showed me so much about you and your character, and it remains to this day what makes me the proudest of you.

Congratulations on your hockey career to date. I know you will continue to play into adulthood and make it a part of your life.  I don’t get to be a hockey mom anymore, but I know in your heart you will always be a hockey player. 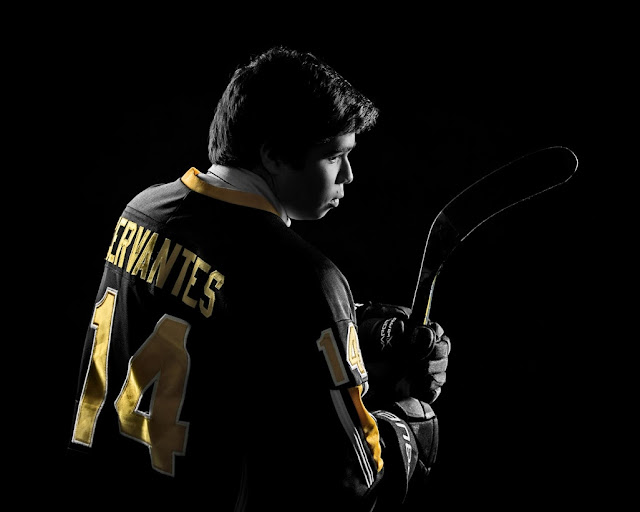