Been offline for a while (OK, total lie, I've been on FB and working, and keeping up with everyone else's blogs on Google Reader) but haven't had much to say around here. I've been busy getting this one a year older, although I have a hard time believing it: 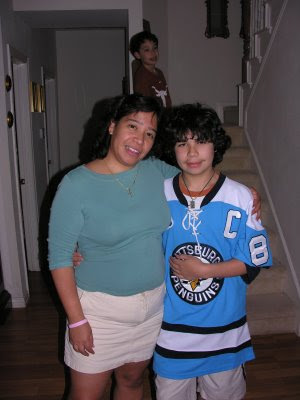 He was thrilled with his hockey-centric birthday gifts (new stick, Sid the Kid jersey from the Winter Classic, new skates -- still too big but ready for him when he needs them, and enough moolah to procure a new helmet) and unlike the birthday when he turned five and dismissed everyone after cake and presents, he seemed genuinely engaged in hanging out with his family at the gathering. At 14, he is definitely attitudinal, sassy and too smart for his own good. But with the flip of a switch, he is also still very sweet and affectionate and good-natured and most amazingly is still willing to sit with me on the couch and watch cooking shows. He alternately fills me with wonder and kills me with his 14-ness.

NOTE: I drafted this the weekend of his party, before his actual birthday, but Blogger wouldn't let me upload the photo and I hadn't had a chance to re-try until today.
at 6:23 AM 1 comment:

So, I haven't blogged in a while, but that's because I was on a crazy-go-nuts trip this week that took me from DFW to DC, then back to DFW (where I at least got to have a leisurely dinner with TDP DinoBoy and Hubby) before heading back to Denver/Boulder for the rest of the work week. Craziness. But I was able to get one great run in mid-week, although I wish I'd had the energy to have more than one. There just wasn't enough time to fit in five flights, airport time and 40 hours of work and some semblance of sleep into four and a half days. Plus there was a crazy-go-nuts drive on Monday evening that should have been FIVE MINUTES down a big thick road (on the map it looked big and thick) but ended up as a 90-minute rain-soaked drive around DC peppered with signs to Maryland, homeless people knocking on my window, and a notable lack of street signs. On the upside, I did see the New Zealand Embassy!

Yeah, and in the midst of that, I also missed out on The Biggest Loser finale, since I was 32,000 feet above West Texas and in a cab while it was on the air. I thought about doing a self-imposed media blackout on it until I could get home and watch it on the DVR, but thought that might be impossible, so I just gave up early Wednesday and googled it. I was not completely surprised that Helen won, but I was a little taken aback by exactly how thin she was. At 117 pounds, she is just above the "underweight" category on the BMI scale. She has lost more than half of her original weight. And while I'm happy for her, I have to say that in reading her follow-up interviews, you can see how she was able to do it:

Some of the other articles I've read mentioned that she didn't go back to work (she had left her job before going to the Ranch), and hired three different trainers. Her kids are older (like the daughter that went to the ranch with her) so they don't require attention or shuttling to and fro for their activities. She also said that she didn't go out with her friends during the time she was home after leaving the last weigh-in -- if they wanted to see her, they had to meet her at the gym. Sounds pretty intense.

Again, I'm not knocking her. I'm glad she was able to get this under control. But I think it's fairly obvious that this is NOT a realistic lifestyle, either for her to maintain long term, or for anyone else with a job, a family, and daily responsibilities. Could I fit six hours of training into each day? Maybe, but not with this job, and not with having to cook, clean, chase homework around, and drive kids to hockey and gymnastics. Would it take six hours a day for me to look like that? Maybe not. Am I willing to try? Not so much. Balance, people, balance.

I imagine that when I get to the point in a few years where I am actively training for long-distance triathlon (still on my radar despite not actually being on a bicycle in several months) that I might hit two or three hours of training a day, with more on the weekends for the long runs and long rides. But one of the reasons I put that off for now is that I can't dedicate that much time to training. Not when my kids are still home and needing my attention, and not when I'm only home three days a week to give them that attention as it is. So does that mean that I've given up on losing weight and getting into fighting shape in addition to my running and whatever tri-training I can get this summer? Absolutely not. All I'm saying is that I need to have some balance, and as much as I love to see the great dramatic results from TBL, I know they are not at all realistic for me to emulate. But it does make for good TV.
at 10:04 AM No comments:

OK, I have to say that the parks here in Colorado do not bear a close resemblance to the parks in my neighborhood. There is a HUGE park not even a mile from the hotel, and I mean HUGE - 740 acres and 25 miles of trails huge! I ran around part of the periphery of it, and didn't even come close to scratching the surface. I am so sad that I ran the opposite direction toward the gym yesterday instead of looking on a stupid map and seeing this expanse of green there so close by.

Anyway, I had a great run there and really challenged myself with all the inclines and trails. These were real trails, as in NOT PAVED! and even though you could see the phone & electric poles and wires (thankfully -- they were part of what kept directionally challenged me on track when the trees obscured the view of Pike's Peak), there really was a feeling of being totally removed from people. I don't get that at Craven's or at Stovall (no offense, South A, really, I love my suburban home... I do!). So it was just a lot of fun, and this place is just perfect for running. I am just sad that I'm only here for another day and won't have another chance for an afternoon run out there. Wah.

wow. there is even less oxygen here in Colorado Springs (6035 feet) than there is in Boulder (5430 feet). But I still made it to the gym to run today, because I'm bound and determined to be ready to have fun at the Bolder Boulder in three weeks. And I won't have a lot of fun if I'm huffing and puffing and flipping out from the hills and gasping for breath because I've squandered my high-altitude training days during the week. So it's back to work for me. I ran a 10K in my neighborhood Sunday afternoon, even though I didn't feel like it. I came in about 1:03, which is a pretty good pace, esp since I was taking it pretty easy. I fully expect to add about 20-30 second per mile to compensate for the altitude, so pretty much anything under about 70 minutes would be a good run for me. I'm really looking forward to it -- it's supposed to be a blast and I'm excited to have the chance to run it. I registered today and when I get to Boulder next week I'll pick up my packet with three shirts (tee, long-sleeved tech shirt, short-sleeved tech shirt) and a pair of Crocs (never had any before, but something tells me I may come to love them).

I was terribly dismayed to log into my sit ups logger today and find that it was MARCH since I last logged a sit ups workout. I was not dismayed, however, to find out that I was able to pick up right where I left off, with Day 3 of Week 2. So that was a little sliver of good news. With push-ups, um, yeah, not so good. We'll be starting Week 1 all over again. I WILL finish, and I am determined to get to where I can do several good-form pushups without dying. I will. That is all there is to it.

So that's what going on at Casa de Skatemom these days. I've got to shift focus once the 10K is over and get back on the bike and jump back into the swim of things. This is going to be intimidating for me, but it must be done. It WILL be done. I won't be fast at either one, but I've never let that stop me before!
at 7:44 PM No comments:

Sticking with Saucony, but going with something a bit flatter. Don't know if this will help me run faster, or get stronger, but we'll give it a try. I'll let you know how they work out once I get 'em. I've heard many nice things about Zappos.com, so we'll see if their customer service needs to be put to the test if they don't work out for me.

didn't run much this week -- just had too much going on with a difficult flight on Monday making me arrive at the office more than three hours late. I felt like I had to play catch-up for the rest of the time in CO. I did walk some on Monday, to and from the Whole Foods, and I ran during The Biggest Loser, but that was it. I'm headed out to the gym here in a bit to hit the incline treadmill, but I have to wait until the iPod is recharged so I don't die of boredom. I'm hoping I can get in two more runs over the weekend and maybe get a streak going for May. Maybe. We shall see.

anyway, gotta go. There is much gnashing of teeth because I won't surrender the laptop. Apparently there is much Mafia Wars to be played... heh....
at 6:07 PM No comments: